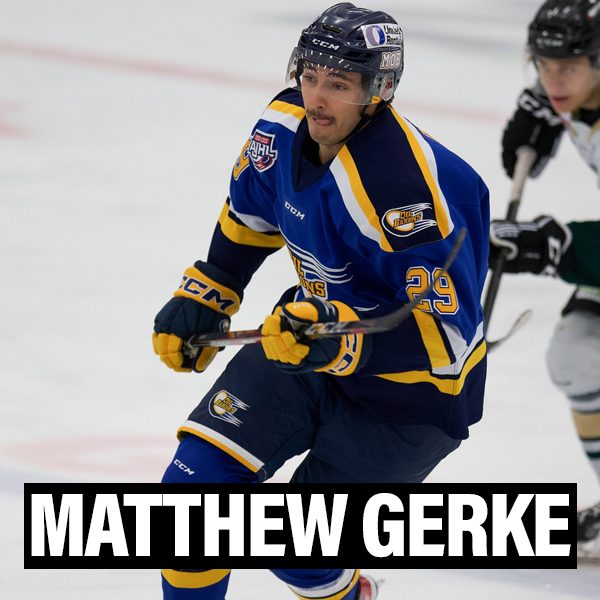 What are some of your main goals within the game over the next 5 years?

I would love to play college hockey after my junior career, and then work to become an impact player on that roster.

Why are these your goals? Why are they important to you? What would it mean to achieve them?

I’ve been interested in collegiate hockey since I was around 13 years old. Seeing the support and intensity of those games has been a source of inspiration to one day get there and experience it firsthand. Actually making that a reality would be the realization of a longtime dream and the pinnacle of years of hard work playing this game.

What separates you as a player and person? What are some areas requiring work? How do you continue to get better?

I am someone who brings an intense work ethic to whatever task is at hand. I believe that the combination of that work ethic and hockey IQ is what enables me to find success and help separate myself from other players. Consistency is a large part of the game and something I am actively trying to improve, as well as the physical commitment that must be made to have an impact on the game. I think by staying aware of my tendencies and reviewing the in-game play, I can use my work ethic to work on the areas of my game that may need to be elevated.

What do you bring to any team you play for? What could a coach expect from you if they selected you for their roster?

I bring a positive attitude to any team I am on and pack offensive creativity alongside defensive reliability to play a detailed two-way game. I am coachable and committed to team systems, and bring a hard work ethic to any task given.

What impact are you looking to have in your sports career? (Community, team, success, etc)

I wanna be a person that people can rely on, whether it&#39;s on or off the ice. Being known as a good teammate is something I strive for and being there for the people who are out on the ice with you is a crucial step in that process. I also aim to be someone who is involved in the community and is remembered positively for the impacts they made while they were there.

What do you believe separates the best players in the world? What attributes/intangibles define them?

I believe the best players in the world have the ultimate combination of skill, work ethic, the ability to think the game and confidence. The most elite in the world excel in all of those categories and combine them together to produce on the ice.

Favorite thing about the game (on or off ice)?

The best thing about the game is meeting so many different people, and being able to create so many relationships that have lasted years. The close-knit nature of the hockey community is really cool to be a part of.

Shopping cart0
There are no products in the cart!
Continue shopping
0