Ray Hamlin will be a key two-way forward for the Coquitlam Express this year in the BCHL and has his eyes set on NCAA Division 1 hockey in the coming years. 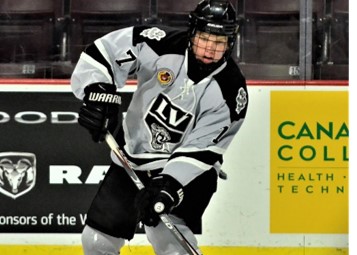 A 2003 born player who plays a heavy, physical game, and who prides himself on being a pest and hard to play against. At 6’0”, 186 pounds Ray is a legitimate 200-foot, 2-way player that is smart defensively and can create plays in the offensive end. Currently in talks with multiple NCAA programs, Ray is preparing for a critical Junior A season after playing 12 games in 2020-21 with the Smith Falls Bears of the CCHL. In the shortened season, Ray compiled 3 goals and 11 assists for 14 points (good for 5th in league scoring). He now joins the strong roster in Coquitlam and looks to help the Express win a BCHL Championship.

Two years ago, Ray was named “Defensive Player of the Year” with the Lasalle Vipers (GOJHL) as a 16-year-old rookie. Aside from his on-ice performance, Ray bolsters a 4.0 overall GPA and has earned honours in all his high school terms. He has also been named the “Mickey Renaud Leadership Award” winner for his leadership on and off the ice, team dedication, community efforts, and sportsmanship in the Windsor community.